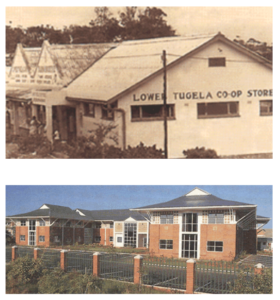 On 11 July 1946, the late Bill Robbins along with 23 other Umhlali and North Coast members came together to form Coastal Farmers’ Co-operative Limited. It was their intention of securing fertilizer, diesel, fuel and other farming requisites at the best possible price for its members. The first Head Office as well as a general dealer, workshop and garage were established and traded as the Lower Tugela Co-op in the premises currently known as Coastals’ Umhlali. The workshop and garage ventures were short lived as the focus turned to the core business of providing agricultural requisites.

Through its unique business philosophy, the vision, skills and dedication of its directors, executive and staff over the years, and the continued support of up to four generations of farmers, “Coastals” – as it has affectionately become known, has grown into the largest purchaser of farming requisites in the KwaZulu-Natal coastal belt.

By the end of the first year the membership had increased from 22 to 66. In 1952, the Head Office moved to Durban, with the Head Office occupying various city centre premises until moving to its own building in 2000 located on Flanders Drive in Mount Edgecombe.

The late Eric Knight, with 25 years of service, was the first General Manager having started with Coastals in 1948. Cedric Knight joined the co-operative in 1966 and became General Manager eight years later when his father retired. After serving Coastals’ for 39 years, Cedric Knight retired and confidently handed over the reins to Lindsay Smith in 2005.

During the years, Coastals has not only survived crippling droughts, devastating floods and momentous social-political change, but has flourished to represent the consumer voice of more than 1,400 predominantly sugar, banana and citrus farmers.

About us
Go to Top